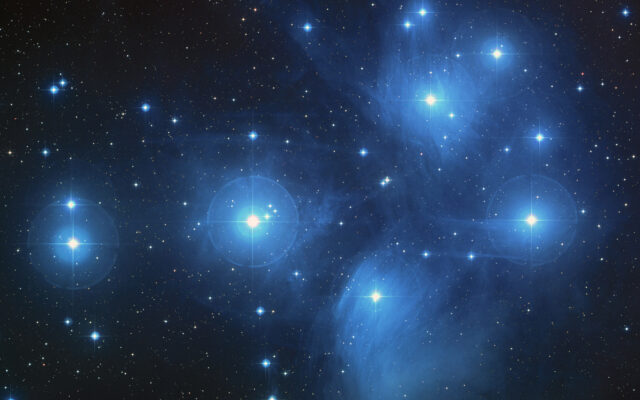 The brilliant stars seen in this image are members of the popular open star cluster known as the Pleiades, or Seven Sisters. The Hubble Space Telescope's Fine Guidance Sensors refined the distance to the Pleiades at about 440 light-years. The Fine Guidance Sensors are at the periphery of Hubble's field-of-view. They trace a circumference that is approximately the angular size of the Moon on the sky. They are overlaid on this image to give a scale to Hubble's very narrow view on the heavens.

Keep your eye on the sky this month. Beginning on Friday (6/10), the five planets of Mercury, Venus, Mars, Jupiter, and Saturn will all be aligned in planetary order. This rare phenomenon has not occurred since December 2004. You’ll need binoculars along with a clear view of the eastern horizon to spot Mercury later this week. Then, as the month goes on, Mercury will become brighter and easier to see. Scientists say the rest of the planets should be consistently visible to the naked eye. You’ll also need to set your alarm for an early morning wakeup call because the best shot to see the spectacular sight is in the 30 minutes before sunrise.